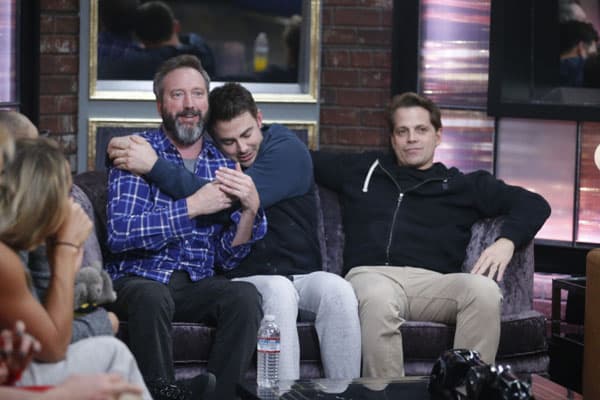 It is night two of Celebrity Big Brother on CBS. Last night, we saw Jonathan Bennett and Ryan Lochte win the first challenge. One of them will now become HOH and the other will become the first one on the block. We will find out more tonight…and quite possibly, the second person on the block.

As an aside, Dina Lohan looks SO much like Lindsay….it’s uncanny.

Kato Kaelin and Natalie Eva Marie are safe due to not participating in the challenge. They were the only two not chosen for said challenge, so this was their reward, so to speak.

Jonathan thinks this is his worst nightmare because he has to compete against an Olympian. Ryan just wants the first HOH.

Joey Lawrence now thinks not winning might be a good thing.

Jonathan tries to make an alliance to save him or Ryan, depending on who loses HOH. They figure they need seven people in their alliance to make it work. He quips that if it works, they have it locked in—RYAN Loch-te!

Jonathan fills LoLo and Tamar in on the plan and tries to get them in their alliance, which will also include Kandi, Joey and Natalie.

Kandi and Tamar discuss the alliance and decide to work together in order to save themselves…at least that is Kandi’s logic.

LoLo tries to get Joey in the alliance under the ruse of working out together. Tamar comes in to see what is going on and they both try to get him in…but he says no! What? How can he hate alliances when he is on Big Brother? I am so confused. He even hates the word? Unless he has something else up his (lack of a) sleeve?

Later on, Ryan is in the pool, while the guys cheer him on.

Tom Green and The Mooch bond over the fact that they were both fired by Donald Trump. the Mooch fills him in on things going on in the White House and Tom thinks they might resolve things while they are in the house.

LoLo fills Natalie in on Joey not wanting to be in their alliance. Jonathan decides to secure the final four with the three athletes in the house….LoLo, Ryan and Natalie. However, Natalie and LoLo decide to be each other’s ride or die.

However….again….Tamar wants an all girl alliance with her, LoLo, Natalie and Kandi.

As an aside, where did Dina go? She has barely said a peep since she entered the house!

Natalie thinks she and LoLo are safe because they are in both alliances.

The HOH competition is called Blockbuster. They will fly across the room and knock down two billboards. Winner is HOH, loser is the first one on the block.

Jonathan seems to think he has it in the bag, but Ryan ends up pulling an upset and winning HOH. Jonathan is on the block.

Ryan now has to pick two nominees to join Jonathan on the chopping block. He has 30 minutes to do so.

Three nominees this week…Tom wants to know what’s next, will they take his right nut?

Jonathan tries to figure out who else should be nominates in order to save himself.

Ryan wants to put Dina up….he is about to say more when Tom walks in and won’t leave. Everyone else keeps walking in, so they give up and decide to discuss it later.

Kandi realizes Ryan is lost…and is mad he won’t tell her anything. She feels like they aren’t even in an alliance at this point because of how he is acting.

Now it seems like Tom, Kato and the Mooch are in an alliance. Kato thinks this is a good political move for him.

Ryan seems to want Dina and the Mooch on the block with Jonathan and everyone agrees. However, Kandi thinks Ryan is acting shady and that the alliance is already breaking down.

Plot twist! Jonathan doesn’t want Dina up because she is like his second mom, thanks to Mean Girls. Ryan is back to square one as to who to nominate. He just decides to wing it.

Nomination ceremony time: The two celebrities joining Jonathan are….The Mooch and Tom….I did not see that coming at all. I honestly thought it was going to be Joey because he isn’t in an alliance. My only thought is that he gets backdoored. I hope not because I’m a fan and wouldn’t even be writing this recap if not for him. However, I think either him or Ricky will get backdoored. Unless they (along with Dina) have some sort of plan since they aren’t in an alliance. I’m curious to see what happens….but expect the unexpected, right?