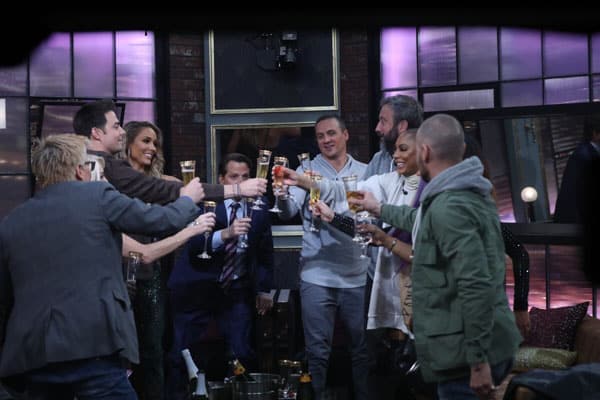 Hello and welcome to the season two premiere of Celebrity Big Brother. Julie Chen Moonves is back as host and ready to introduce twelve new celebrities for a month long game.

As always, Julie tells us to expect the unexpected.

As they go exploring and get to know each other, we are introduced to the next six guests. Tom seems to be using his comedic ways to get to know everyone and almost makes Tamar choke on grapes.

Jonathan is so excited to meet everyone and it is adorable! I think America will fall in LOVE with him!

Tom is excited about the MOOCH! He quips that they were both fired by the President. (Tom was fired on Celebrity Apprentice.)

Ricky is excited about Kandi, who is not sure how she feels about Tamar being there.

Everyone is already in love with Joey.

Julie says they will be competing for HOH…in pairs…..and only one will be HOH once one pair becomes victorious.

Only five pairs will compete, with one sitting out and not eligible for HOH.

Ryan is randomly chosen to pick his partner. He takes Jonathan.

Jonathan picks Tamar to pick her partner. She chooses Kandi.

Tom chooses Dina, who chooses the Mooch…only because he is the only one whose name she remembered.

Natalie and Kato are not chosen, but safe from elimination.

One team is in pink, on a Monday….Jonathan quips that Regina George will be mad because we wear pink on Wednesdays.

The competition is called Drinks on Us. The team has to fill champagne glasses and the first to do so wins….once they get a bubble.

It’s not very fun to watch because they are on swings while trying to get champagne into the glasses, but their commentary is hilarious. Also, after all these years, I still am in love with joey Lawrence. He wants HOH to have his own bathroom to do bathroom things. I can’t argue with that.

All I could say is that I would fall off the swing and hit my head during this and kiss my chance at HOH goodbye. I’m that much of a klutz.

Ryan and Jonathan win—although I am not quite sure how because I’m not even clear on what they were doing, but good for them. As long as my boy Joey is not on the chopping block.

Only one of them will be HOH and the other will get a game changing surprise.

Julie tells them about the new twist…the two winners will now battle against each other. The winner is HOH, the loser is the first nominee up for eviction.

Jonathan quips that he has a lot of participation trophies and Mr. Congeniality is coming for Ryan the Olympian.

Tune in tomorrow to see what happens!